Percolator vs French Press: Which is the Best Coffee Making Method?

It’s not uncommon to think between using a percolator vs French press to make coffee. Especially during the last few years, making great coffee at home has seen a huge resurrection in terms of popularity leading people to try out different coffee brewing methods.

In this article we’re going to compare percolator vs French press in terms of:

But first, let’s inspect each of these coffee brewing methods briefly. 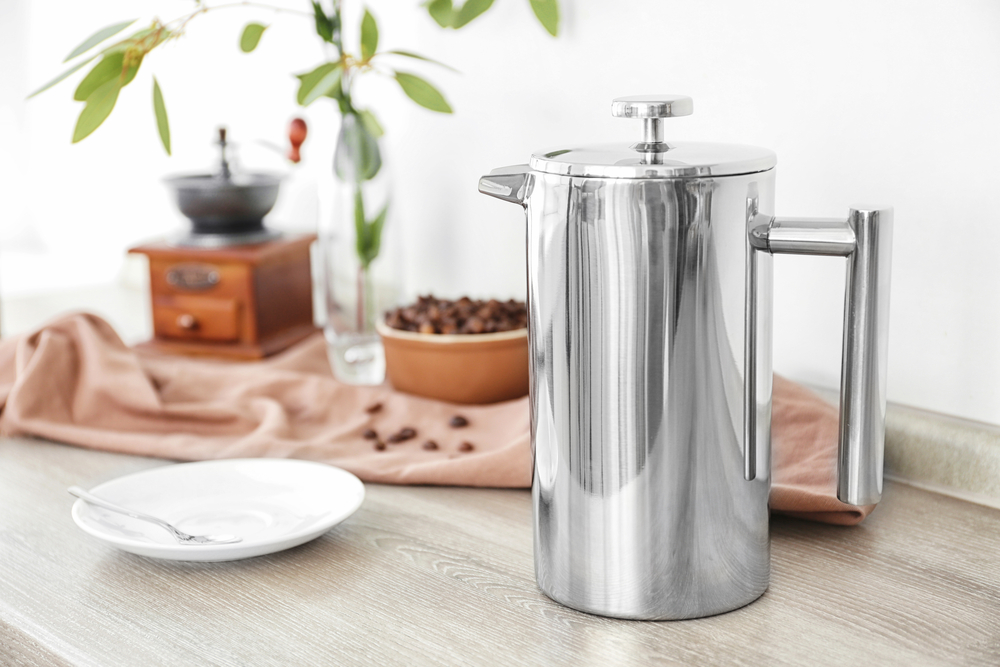 Percolator coffee makers have been around for a very long time. Invented in the late 1800s, percolators were once a popular method for making coffee. They work by heating water in a chamber and then forcing it up through a tube and into another chamber that contains the grounds. The hot water then percolates (or filters) through the grounds and back down into the bottom chamber where it’s stored until you’re ready to pour it.

To prepare coffee with a percolator you’ll need:

Here’s a quick step-by-step guide on how to make coffee on a Percolator:

One of the main benefits of percolator vs French press is that they’re relatively easy to use. You simply add water to the chamber, ground coffee to the filter, put it on the stove, and wait for it to finish percolating.

Percolators also have a fairly quick brew time. It usually takes a percolator just a few minutes to make a full pot of coffee.

In terms of taste, percolator coffee can be quite strong and full-bodied. This is because the percolation process can extract more oils and caffeine from the beans than other methods like drip brewing.

Percolators are also relatively inexpensive, which makes them a great option for coffee lovers on a budget.

![French press](/french-press.jpeg) Now let’s take a look at French press coffee makers. French presses were invented in the early 1900s and have become increasingly popular in recent years. They work by steeping grounds in hot water and then pressing a plunger down to filter the coffee.

To prepare coffee with a French press you’ll need:

Here’s a quick step-by-step guide how to make coffee using a French press:

Like percolators, French presses are relatively easy to use. You simply add water and grounds to the press, let it steep, and then filter it.

French presses also have a fairly quick brew time. It usually takes just four minutes for the coffee to steep before you can filter it and enjoy.

In terms of taste, French press coffee is often rich and flavorful. This is because the steeping process allows the grounds to fully release their flavor into the water.

French presses are also relatively inexpensive, which makes them a great option for coffee lovers on a budget.

So, which is the best coffee making method between percolator vs French press? Let’s examine further.

Percolator vs French press, which is the best coffee making method? This is a question that has been hotly debated among coffee lovers for years. There are pros and cons to both methods of making coffee. Here’s the comparison.

If you’re looking for an easy-to-use coffee making method, then the percolator is the way to go. French presses require a bit more effort to use, but many people feel that the extra step is worth it for the richer flavor that they get from using this method.

The easiness of percolator comes from the fact that you just need to add water and coffee grounds to the percolator pot and put it on the stove. Once the water boils, it will percolate up through the coffee grounds, giving you a delicious cup of coffee in minutes.

The danger with percolator is that if you leave it on the stove for too long, your coffee will become bitter. This is why it’s important to keep an eye on the percolator and remove it from the heat as soon as the coffee is done percolating.

French press, on the other hand, requires you to steep coffee grounds in hot water for a few minutes before pressing the plunger down to filter the coffee. Many people feel that this extra step results in a richer, more full-flavored cup of coffee.

The downside to using a French press is that if you’re not careful, you can end up with a lot of grinds in your cup of coffee. This is why it’s important to pour the coffee out of the French press slowly and carefully.

So, which is the best coffee making method? It depends on personal preference, but in terms of ease of use percolator just edges it versus a French press.

When it comes to percolator vs French press, brew time is an important consideration. If you’re looking for a quick cup of coffee, a percolator is the way to go. French presses, on the other hand, take a bit longer to brew but produce a richer cup.

If you’re making coffee for a large group of people, a percolator will be the faster option. But if you’re looking for a cup of coffee with more depth of flavor, go for a French press.

In other taste tests percolators have fared better, but it really depends on your personal preferences. If you like a strong cup of coffee with a bit of bite, then the percolator is probably the way to go. But if you prefer a smoother, richer flavor, then the French press is the clear winner.

When it comes to convenience, the percolator is the clear winner. It’s much faster than the French press, and you can set it and forget it - no need to watch it like a hawk to make sure the coffee doesn’t get over-extracted.

The French press does require a bit more attention, but many people feel that the extra effort is worth it for the improved flavor.

The French press also requires more time spent on keeping the equipment clean while percolators only need to be emptied and rinsed out after each use.

Both percolators and French presses are relatively inexpensive, so price isn’t really a factor in deciding which one to buy.

You can get a decent percolator starting at around $30, and a good French press will set you back about the same.

You can of course find more premium models of both of these coffee making machines, but for the average coffee drinker, either a percolator or a French press will do just fine.

So, percolator vs French press - which is the best coffee making method? The answer, as with most things in life, is it depends. It really comes down to your personal preferences.

If you like a quick cup of coffee with no fuss, go with a percolator as it’s the more convenient option. If you’re looking for a richer, full-flavored cup of coffee, go with a French press.